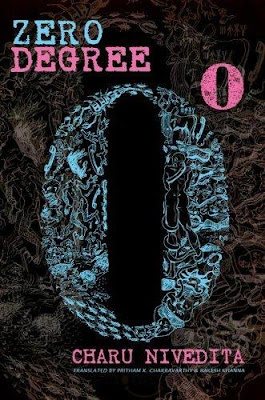 The novel begins by addressing The Lady Reader and it suggests, that as she begins reading the text of Zero Degree, she maybe upto anything—working, having sex, fantasising, chanting, screaming with labour pain etc… As Charu Nivedita spews his critique, or a disguised critique of magic realism that is undergoing an existential crisis—it gets a wee bit complicated here—one witnesses the throes of one literary genre getting transformed into another.

Whatever Charu Nivedita likes to call this form of writing it is far from boring. It is a laugh riot and you are sucked into the novel not knowing how to tackle it. I am warning you that there is no easy method to read this, you will get lost in the sea of ideas and words and there is no looking back. Don’t bother to go back to unravel things—I suggest you just flow with the words. Then it gets more complicated—the existential crisis of the author gets intertwined with the existential crisis of the genre and that gets intertwined with the existential crisis of the characters of the novel and all this gets reduced to absurdity. Oh god that’s another genre. Let me quote from the book to try and make you understand the complexities of dealing with this novel. “The ‘I’ that appears at the beginning of this novel refers to me, Charu Nivedita, the author. But there are actually several other ‘I’s responsible for the book. First of all, there is Surya, who wanted to write a novelisation of the life of Muniyandi, and dedicate it to his daughter, Genesis; he made pages and pages of notes, and pasted in lots of clippings from daily newspapers. Then there is Muniyandi himself, who later went through Surya’s notes and made all sorts of corrections and revisions.” That kind of sums up what you are going to encounter. And to add to that the "I" in the review is me.

Halfway through the novel, I throw up my hands and cry that things are quite inexplicable. Punctuation marks, grammar and sentence construction are given the miss, to deliberately create chaotic chapters. The narrative is interrupted by newsreports, critiques on Latin American novelists and reports about Africa without any manners. Yes, without any manners, I would say, because I want to cling to the last vestige of sanity—grammar and manners. I am not the only one who accuses the writer of a certain madness. “I think it would be a good for you to see a psychiatrist, said a Lady Reader.” To which the writer replies, “Lady Reader, if there was a psychiatrist who would do me any good, then he would also be able to eradicate starvation, famine, corruption, exploitation, megalomania, and jealousy, he said, vexed.” I am now beginning to understand why the first writer Muniyandi was killed or said to be killed by the words that he himself created, “he wrote these notes in reality the words themselves wrote this novel as is borne out by the fact that the characters attempted to kill the author….”

As in all experimental novels, the first time a reader attempts to read it, he is astounded, and then it grows on him. So does Zero Degree—it is a brilliant novel that was written in Tamil much ahead of its time. We had to wait for Pritham K Charavarthy and Rakesh Khanna to translate it and Blaft to publish it ten years after it was first published.

October 19, 2009
Free masonry- the 'spiritual society' of sacred brotherhood with its origins in antiquity has always been shrouded in mystery. Their initiation rites, rituals, symbolisms, secret signs and code of conduct have further enhanced the aura of mysteriousness. Is Free Masonry a remnant of an ancient religion that worshipped the Sun or is it just an exclusive, elitist boy's club that indulges in secret charity missions? In 1961 the Grand Lodge of India, which is an off -shoot of the Grand Lodges of Scotland, England and Ireland was constituted. The Grand Master of the Grand Lodge of India Mr.Arun Chintopanth was recently here in Kochi to preside over the meeting of the Regional Grand Lodge of Southern India. In an exclusive interview with the Grand Master sought to demystify the Masonic Lodge. Arun Chintopanth in full regalia. Dont miss the apron. What is Free Masonry? It is not a service organisation. It is not a religious group. It is not a mutual benefit society
5 comments
Read more

November 30, 2007
I am 51 years old. And I would like to continue to be a sex worker.” This is how the candid and defiant opening statement in Nalini Jameela’s autobiography in Malayalam, Oru Lymgika-thozhilaliyude Atmakadha, goes. It at once throws a challenge at society’s double standards — harsh on prostitutes and soft on the clients. Nalini Jameela, who is the coordinator of the Kerala Sex Workers’ Forum, reveals her sordid story with no trace of compunction. Nalini was a 24-year-old widow when she entered the profession to feed her two children. At that time she did not think about the repercussions of her act. She writes, “I was earning Rs 4.50 at a tile factory near Trissur. My mother-in-law served me with an ultimatum to either give her five rupees a day to look after my children or leave the house. I recounted my woes to a friend, who introduced me to Rosechechi. Rosechechi promised me Rs 50 if I spent time with a man. The first thought that came to my mind was that my children would be look
8 comments
Read more

December 05, 2007
Nazarani Tharavad, Pala I t is in the geography of drenched greens and coconut palms where the persistent peal of the thundering rains wakes up every dormant seed and jerks it into a tangled mass of leafscape. We are in the Nazarani Tharavad in Pala, a rubber town in central Travancore. The St.Thomas Church, Pala The Nazaranis(Syrian Christians) have been around a long time in Kerala. Popular theory suggests Christianity was well established here, at least three centuries before it wore the official robes of a religion in Europe. The rulers of ancient Malabar gave the Christian community the grant of privileges perhaps for their social and economical eminence and the traces of those privileges have survived to this very day. Some of the privileges granted to them were curious, like the light by day (Yes, the light by day had to be granted and was an exclusive privilege!), the use of the umbrella, the spreading cloth to walk upon, doubling up the end of the banana leaf which
6 comments
Read more