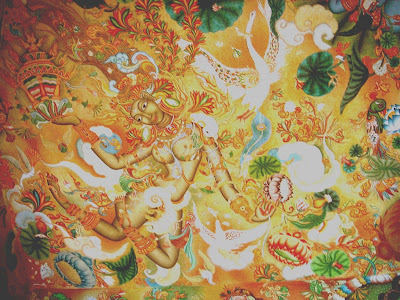 Detail of the mural in the Pathy home in Coimbatore

Kerala Murals, once exclusive to the royal and sacred walls, instantly command your awe and reverence. The mesmerized beholder is then impelled into the realm of silence- transfixed by the play of Gods and Goddesses on the earthly walls.

It is perhaps to create a genuflecting atmosphere that temples, palaces and churches in Kerala decorated their walls with intricate chumarchitrangal (murals) that told stories from the Mahabaratha, Ramayana, Puranas and the Bible. One of the most fascinating works of mural art is on the walls of the at which was probably executed in the late sixteenth century. It’s the Ramayana epic that seamlessly unfolds in the palliyara (royal bed chamber) on the upper half of the walls while the border is covered with simple textile designs that mural artists call veeralli pattu. 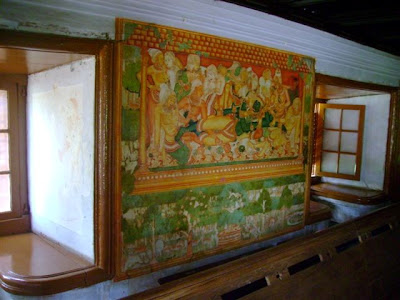 Murals in the Mattancherry Palace 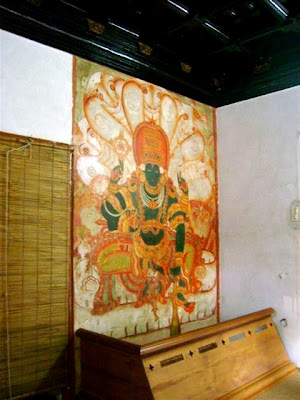 However this highly stylized art went out of fashion for most part of the twentieth century and it is only in the last decade and half that there has been a renewed interest and revival. Today it is the new age royals- industrialists like Rajshree Pathy, the Chairman and MD of Rajshree Group of Companies, who can enjoy this art in the same manner as the Maharajas of yore. The entrance of Pathy’s home in flow with the paintings of the Dasavataaram (ten incarnations of Lord Vishnu) done by Sadaanandan, Krishnan Mallissery and Ajithan Puthumana. 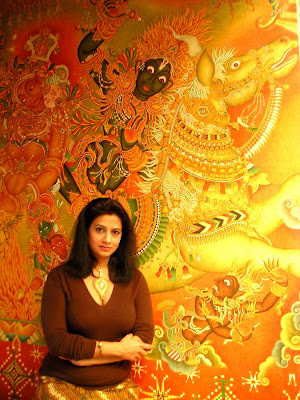 Rajshree Pathy
She says that even after years of surrounding herself with Kerala murals she still feels inspired by the grandeur of this art. “It is a very fine form of expression and it is very different. The mural in my home was created with such devotion and there is much more fluidity in the work when it is done in the private space. Kerala Murals have the echo of the and the Ellora tradition and what is fascinating is the cross cultural influences and intermeshing of the north and the south cultures. The borders of the murals are decorated with the motifs of the patola sari of . This is .” She emphasizes. Rajshree who has always promoted art and craft strongly feels it is now the responsibility of the industrialists to promote this tradition and preserve it for the next generation or it would simply vanish.

It took nearly six months for the mural in the Pathy home to be completed. Says Sadaanadan,“It is one of the finest works done by three senior mural artists. We were of same wavelength and we knew perfectly how we should work. Such compatibility in team work in mural artists is now hard to find.”

The subject of the murals in the temples usually revolve around the principal deity, likewise even in the homes the subject and the positioning of the mural should be given importance feels Unni Thampuran of Poomully Manna, one of the richest Nampoothiri families in Kerala, who have been traditional practitioners of ayurveda for several hundred years. The ootupura (dining hall) in Poomully Manna where the patients and guests have their meals has a large mural Ganapathy Prathal by mural artist Manikandan Punnakkal. The story goes that anyone who came to the Manna never went away hungry and so the theme of the mural suggests that it is not what you give but how it is given is important. 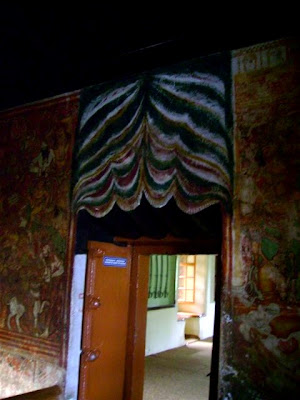 The Kerala murals if done in the traditional method of treating the walls with the mixture of lime, sand and herbal water and then coating it several times with tender coconut water and lime mixture, then finally painting the mural with the five natural colours can last over a thousand years. But the modern concrete buildings with a lifespan of just hundred years make poor material to house this ancient art. Hence the rapid migration of this art from the walls to other surfaces like canvas and wood.

A beautiful “Gopika Vastraabharanam” on wood by Saju Thuruthil grabs the attention in the home of Mini and M. S. A. Kumar, MD of AVT McCormick Pvt. Ltd at Vazhakala. The “Gopika Vastraabharanam” symbolic of granting moksha to the gopikas and the complete subjugation of the ego in the presence of Lord Krishna is often interpreted as the god in a naughty mood. Set in the centre of the dark wooden bar cabinet, the oval mural becomes the focal point in the “cozy room”. Arranged around the mural are low Jaipur chairs and scatter cushions. It sets the tone in this comfort zone for libation and camaraderie and often the conversation gravitates towards the mural.

While the curlicue narrative on canvas in the adjoining dining area has quite the opposite effect. The Arrumugham placed above Mini’s collection of Ganapathy on the bhoomi pooja area creates a hallowed space. Says Mini, “After the bhoomi pooja, we were advised by the priest that no should walk over the area where the pooja was performed. Since it is in the dining room the only option I had was to create a space that is both holy and decorative.”

Interior designer Susheela Nair, who has been incorporating traditional and modern Kerala murals into her designs ever since the great revival in the nineties, says they complement both the contemporary and the oriental designs. “As the contemporary interiors are an eclectic mix- the Kerala mural style paintings fit perfectly with the fusion of the antique and the trendy. A traditional mural used with a chic glass and wood design can produce exciting results. The tricky part is the colour scheme. The colours of the murals are vivid so one needs to choose the right colours for furnishings otherwise it can look incongruous.”

Artist Thuruthil’s residential gallery at Kalady goes beyond the canvas. On invitation one can see both the art and the artist: the intimate relationship between the two is unbroken and on exhibit. Much of Thuruthil’s work sees a marked shift to the modern idiom where the detailed religious iconography is replaced by commoner themes. “The stylized traditional drawings of the figures are done on the basis of what has been pronounced in the ancient texts of Bharata Muni and Vatsyayana. I follow the same guidelines in my modern murals too and the subjects chosen by me create a positive atmosphere. In my Yekshi series (in charcoal) I have steered away from the stereotypical image of the yekshi (witch) and created a happy singing creature that lives on palm trees and emerges from flowers.” Says Thuruthil.

The Chayaamukhi(Magic mirror) Kerala mural style painting dominates the bedroom of the Thruruthil residential gallery. Done in vibrant colours the maidens entwined by the tropical allamanda are images that Thuruthil “sees in his magic mirror”. Set into one of the walls is the cement relief of Krishnakeli done in green. Living with imposing art work seems to come naturally to his wife Seena. She accepts the disruptiveness of their daily routine when people call on them at odd hours and adjusts her time accordingly. “An artist is an asset to society and I feel he cannot be confined to the family, others should be able to experience Saju’s work anytime they want to.

(First published in HOME –India Today. Some changes have been made.)

Venu Sivan said…
hey nice article yaar...i`m also fascinated about Kerala murals...its most beautiful piece of art.....but u should hav included the natural method and materials used for this murals...most of the materials are from fruit juces...anyway murals in padmanabhaswamy temple tvm is the most beautiful i think....u can go for a detail study of this ..a book may be...best of luck ..and keep writing...
11:23 PM

Rahul said…
Comprehensively written and very well explained.... Kochi is full of diverse kind of tourist attractions... Mural paintings are something i had not heard that often...
2:54 PM

October 19, 2009
Free masonry- the 'spiritual society' of sacred brotherhood with its origins in antiquity has always been shrouded in mystery. Their initiation rites, rituals, symbolisms, secret signs and code of conduct have further enhanced the aura of mysteriousness. Is Free Masonry a remnant of an ancient religion that worshipped the Sun or is it just an exclusive, elitist boy's club that indulges in secret charity missions? In 1961 the Grand Lodge of India, which is an off -shoot of the Grand Lodges of Scotland, England and Ireland was constituted. The Grand Master of the Grand Lodge of India Mr.Arun Chintopanth was recently here in Kochi to preside over the meeting of the Regional Grand Lodge of Southern India. In an exclusive interview with the Grand Master sought to demystify the Masonic Lodge. Arun Chintopanth in full regalia. Dont miss the apron. What is Free Masonry? It is not a service organisation. It is not a religious group. It is not a mutual benefit society
5 comments
Read more

November 30, 2007
I am 51 years old. And I would like to continue to be a sex worker.” This is how the candid and defiant opening statement in Nalini Jameela’s autobiography in Malayalam, Oru Lymgika-thozhilaliyude Atmakadha, goes. It at once throws a challenge at society’s double standards — harsh on prostitutes and soft on the clients. Nalini Jameela, who is the coordinator of the Kerala Sex Workers’ Forum, reveals her sordid story with no trace of compunction. Nalini was a 24-year-old widow when she entered the profession to feed her two children. At that time she did not think about the repercussions of her act. She writes, “I was earning Rs 4.50 at a tile factory near Trissur. My mother-in-law served me with an ultimatum to either give her five rupees a day to look after my children or leave the house. I recounted my woes to a friend, who introduced me to Rosechechi. Rosechechi promised me Rs 50 if I spent time with a man. The first thought that came to my mind was that my children would be look
8 comments
Read more

December 05, 2007
Nazarani Tharavad, Pala I t is in the geography of drenched greens and coconut palms where the persistent peal of the thundering rains wakes up every dormant seed and jerks it into a tangled mass of leafscape. We are in the Nazarani Tharavad in Pala, a rubber town in central Travancore. The St.Thomas Church, Pala The Nazaranis(Syrian Christians) have been around a long time in Kerala. Popular theory suggests Christianity was well established here, at least three centuries before it wore the official robes of a religion in Europe. The rulers of ancient Malabar gave the Christian community the grant of privileges perhaps for their social and economical eminence and the traces of those privileges have survived to this very day. Some of the privileges granted to them were curious, like the light by day (Yes, the light by day had to be granted and was an exclusive privilege!), the use of the umbrella, the spreading cloth to walk upon, doubling up the end of the banana leaf which
6 comments
Read more